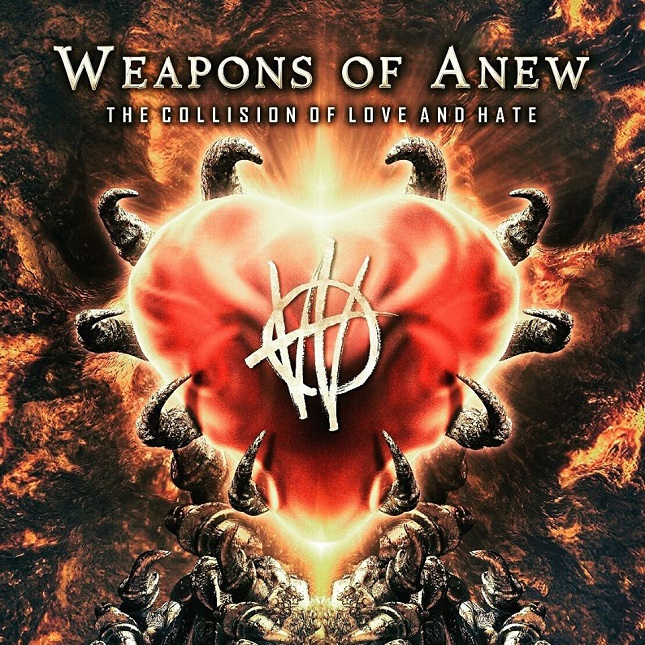 That’s how Ray West, singer for Weapons of Anew, describes his connection with the band’s guitarist, Freddy Ordine.

“Sometimes, you meet a person and it instantly comes together,” says West, according to the band’s website. And indeed, it came together quickly for Weapons of Anew as they found themselves touring with Alter Bridge despite not even having a studio album to their name.

Sure, it didn’t hurt that certain band members — including both West and Ordine — had previous band experience.

“We were in the middle of recording our first record and had to stop and get into tour mode,” recalls Ordine of Weapons of Anew joining Alter Bridge. “We had never played a live show as a band at that point. A few of us had been in other bands and toured so we knew what to expect. But we also knew we needed to bust our asses and make sure we brought our A-plus game to the stage every night. It was awesome to get the reception we had gotten.”

“As a supporting act, you can see the looks on people’s faces going from ‘Who the fuck are these guys’ to ‘Goddamn, these guys are swingin’ for the fences, and I like it!'” says West.

ED spoke with Weapons of Anew about their onstage dynamics, the band’s composition and their single “Sundown.”

ED:  ”Performing live” was the first time you felt validation — can you describe that scene? Was it validation on stage or after the show when you had a moment to yourself?

WEST:  When you see people starting to get their groove on, from the live vibe, and songs you helped to create, it’s a very humbling, and, dare I say, validating thing. It proves to me I’m right where I’m supposed to be. To be honest, I don’t look for validation while I’m performing, but I do tend to get this crazy sort of a psychotic smile that shows up on my face when I know things are going well.

And I’m going to add, that after a show is when I definitely take a moment or two, or three, to reflect and let it all soak in. I always get a kick out of being the singing and dancing monkey!

ED:  How did you end up playing on Alter Bridge’s “The Last Hero” tour? Reviews of your live set were incredible so how reaffirming is it to have that positive feedback right off the bat?

ORDINE: Honestly it was just the right place at the right time. An ex-manager had a relationship with someone from the Alter Bridge camp and made it happen. I had gotten the call Christmas Day asking if he can make an Alter Bridge tour happen. Once the reviews started to come back, we were all blown away by them! We really didn’t know how people were going to react to us. So it was killer to have it play out the way it did for us.

ED:  How much easier is everything (finding a label, booking a show, recording an album, etc.) when there are band members who come from previous bands that have navigated all these waters before?

ORDINE: Nothing is easy in this business! We definitely had a bunch of people we knew and had great relationships with, so it made the process a bit easier from the getting-started standpoint where people would actually take our calls. But honestly, we don’t expect anyone to do anything for us because of our pasts. We are a new band and have to earn our spot. We all say it, we have a long road of hard work ahead of us. But that’s part of the process and we embrace it.

ED:  Do you find it’s a conscious effort to change up what you’re doing for Weapons of Anew from what you did with previous acts? Or is it more of stick with what got you there?

ORDINE:  It was definitely a conscious effort to not sound like any of our old bands. There are elements from all our pasts, but that’s what makes this thing a cool thing for us. It’s something new.

When you see people starting to get their groove on, from the live vibe, and songs you helped to create, it’s a very humbling, and, dare I say, validating thing. — Ray West

ED:  For those who haven’t experienced Weapons of Anew in person, what kind of experience is one of your performances?

ORDINE:  When I wrote it and first heard it finished, I said to the guys, ‘That song is a strip club anthem!’ It’s a fun song — to me, it just had that driving, dare I say sleazy kinda vibe to it. It’s our nod to the lifestyle!

Let your “Hair Down” with Vol. 81 of StripJoints