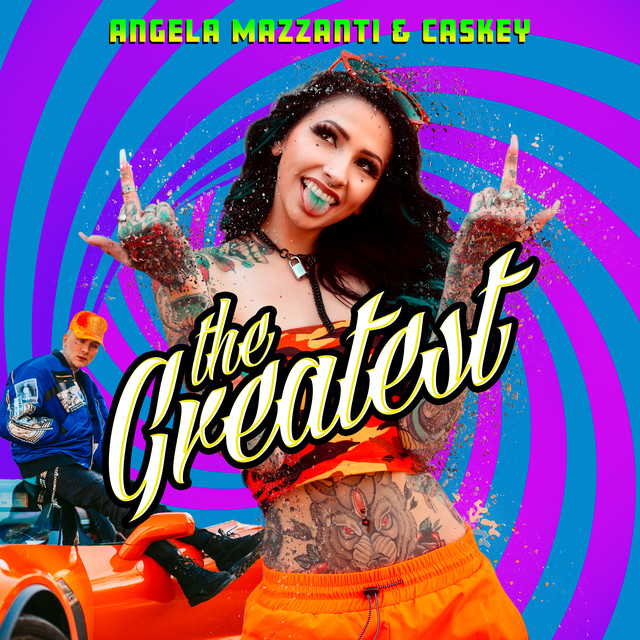 Angela Mazzanti’s first tattoo was script on her back reading “Rise or Die Trying.”

ED Magazine spoke with Mazzanti on sparking her music career, her new single “The Greatest” and her ink since that first piece.

ED:  What are some of your biggest musical influences?

MAZZANTI:  At this moment and on the spot, I’d prob say Cardi B, Rico Nasty, Tay Money, $uicideboy$, Ghostemane, some female influence but definitely a lot more male rappers I listen to.

ED:  Did you fall in love with tattoos after the first, or did you always have in mind several tattoos at least?

MAZZANTI:  I always knew from the beginning that I wanted to have tattoos. I was always that kid who always needed to do something, trying to hide piercings from my mom, do something crazy with my hair. Nothing was ever enough. I was always insecure in my body, even though I am pretty thin, there was something I felt was missing and that’s when I fell in love with getting and having tattoos — the more I started to get, the more I felt in my skin.

ED:  What was it like being in the 2016 film Streets of Vengeance?

MAZZANTI:  That was crazy. I’ve never considered myself an actress or anything, but it was cool to branch out and do something different that I wouldn’t normally do. It was a fun and new experience.

ED:  When you were modeling or breaking into the cannabis industry, did a music career cross your mind? Was that what you had in mind the whole time?

MAZZANTI:  As far as music goes — I used to play sax and the drums when I was younger and I did vocals for a metal band in high school — I’ve always been into music. The hip-hop/rap scene, I didn’t really get into until 19, 20. I would be doing music videos and I’d be cast as the video vixen or whatever and hated that all these rappers are talking about these things they have and things they do and it’s like ‘Dude, you don’t even own your own car. You don’t own this jewelry that you have.’ Well, if they can do it, I can do it. I started joking around with it and two, three years ago I linked up with a producer who helped me take it to the next level. He was like ‘Let’s really do this, you have the following now.’”

Being able to have a female-heavy song played in a female-heavy strip club, why not? You have all these dudes playing their music talking about all these bad bitches but don’t really know what being a bad bitch is about. — Angela Mazzanti

ED:  How did you get to working with Caskey on “The Greatest”?

MAZZANTI:  We connected through the cannabis industry. I’ve known him through Cali Plug (a cannabis company) and some of the events I’ve seen him at. But when I started recording my first single, someone I worked with had a close connection with Caskey.

ED:  You’ve used social media to launch your career, so I’m curious if you think with so many ways to get your music out in this day and age if it’s easier to stand out or harder because there is so much possible material/competition?

MAZZANTI:  I feel like it is harder because you are competing against hundreds of thousands of other people now. I do feel like it’s easier to build a fanbase if you do it right and if you’re different and you stand out from the crowd. You can use social media to your advantage in so many different ways.

MAZZANTI:  I think DJs should be playing this music in strip clubs because I’m a bad bitch doing badass things, and that’s what strip clubs and strippers are all about. The way I look at it is female empowerment: I love the fact that girls can use their bodies to make money like this. It doesn’t turn the same for men. Being able to have a female-heavy song played in a female-heavy strip club, why not? You have all these dudes playing their music talking about all these bad bitches but don’t really know what being a bad bitch is about.

The Kiwi who will drive you Wilde – Bambi Wilde!

StripJoints 72 is a cut above the rest!