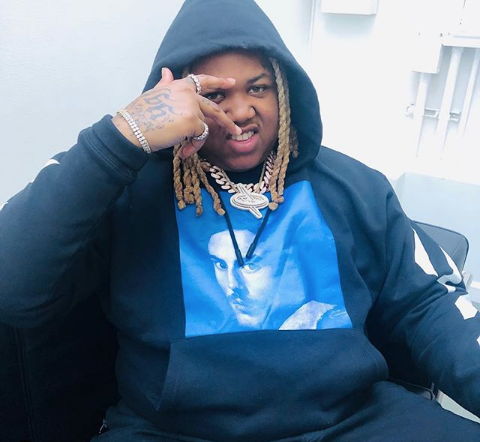 Growing up, Pop Lord admittedly didn’t have much of an interest in rapping.

“When I got hurt, I turned to the streets,” recalls Pop Lord. A friend at the time actually had a studio in his basement and implored Pop Lord to try rapping one day.

“My friend asked me why I wouldn’t rap and I’m like ‘I don’t know anything about rapping.’ He just told me it’s entertainment. He helped me write my first rap and from there, it’s just been up,” says Pop Lord.

ED caught up with Pop Lord about his track “Call Me Daddy” featuring Lil Baby and what kind of name he is trying to make hailing from the hip hop hotbed that is Atlanta!

POP LORD:  It’s really not a matter of preparation. I thrive off the energy of what’s around and current events. I’m still rapping about what I’m doing since I first started. When I say current events, it can be something like a conversation I had that week or what I had to eat for breakfast that day. When it comes to the stage, it’s the same thing — I thrive off the crowd.

ED:  What’s the most memorable performance you’ve had so far?

POP LORD:  Panama City Beach, Florida. It was so packed. I never knew I had a mass crowd that would come out for me; they sang it word for word. It was wonderful.

ED:  How did you get to working with Lil Baby on “Call Me Daddy”?

POP LORD:  We’re from the same neighborhood, we grew up together in Southwest Atlanta. Our families know each other. It’s a family connection.

ED:  How are you trying to carry the mantle of Atlanta hip hop?

POP LORD:  I want to be a great, like some of the others that have come out of there — Ludacris, Goodie Mob — I feel like I have a different mission. A lot of people rap about the same thing, but the mission and what you leave behind, that’s different for me.

ED:  Do you think with so many ways to get your music out in this day and age that it’s easier to stand out or harder because there is so much possible material?

POP LORD:  I think people should just be them. If you are a stand-out person, you’ll stand out regardless. There are enough people in the world for somebody to like you.

POP LORD:  It’s the hottest thing on the streets. We’re trying to go triple platinum off this one. It’s going to get the girls into it, the boss fellas into it, guys are going to spend, girls who need to be spoiled who deserve it. It’s just a good feeling.

Next up on the Mainstage: Nick Failla

Putting the industry in the Pole Position