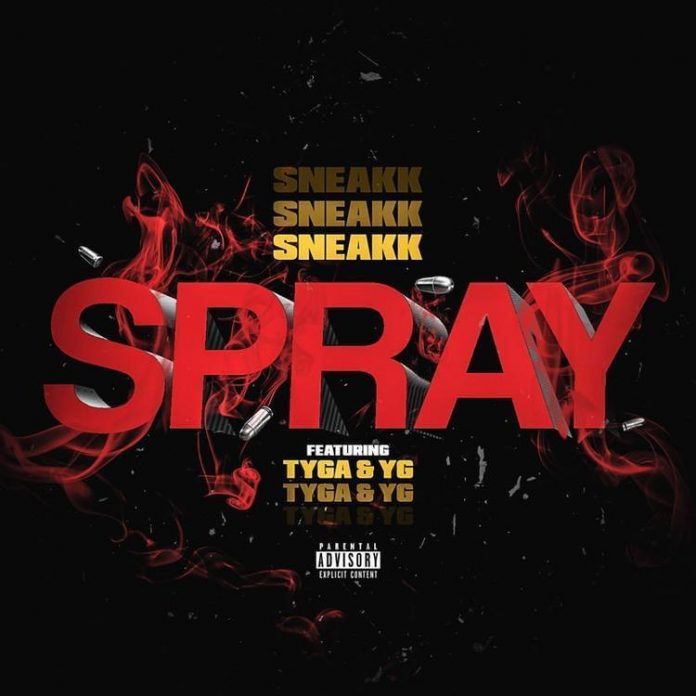 Rapper Sneakk, who has found success, in part, with SOB x RBE (Strictly Only Brothers x Real Boi Entertainment) has branched out on his own and his helping re-establish Vallejo, California as a hotbed of hip-hop.
EXOTIC DANCER spoke with Sneakk about signing with Def Jam, repping Vallejo, and his new song “Spray” which features its own heavy hitters of the genre. “Spray” is one of the newest tracks featured on the StripJointsMusic.com DJ pool, exclusively for gentlemen’s club DJs!

ED: For those who don’t know, talk about the music scene in Vallejo and where you fit into it?

SNEAK: The music scene is crazy right now. We hyped like back in the Mac Dre, E-40 days. Me, I’m just doing it for the people that have been down, been up—you feel me? If my sound, and my way of music fits people, if it fits everyone’s descriptions—that’s what I fit. I won’t say my music is super hypey or even super up tempo, but it reaches a lot of people that know about the struggle. I like to uplift people. I go through my DMs and people will tell me I helped get them out of something.

ED: Talk about what it meant to sign with Def Jam?

SNEAKK: To sign with Def Jam was one of the craziest things too. When I did my homework, the last person to sign with Def Jam was Richie Rich, 22 years ago, when I was born. That blows my mind everyday because I want to be a legend. I want to leave a mark on the world, on the music industry. And to be a part of something so legendary like Def Jam, it made me feel thankful, it made me feel blessed, it made me know I would never let this opportunity slip.

ED: How did you come to work with Tyga and YG? What was it like working with them on “Spray”?
SNEAKK:I was excited to hear about the conversation, but I wanted to see it happen. I remember rapping in the garage and we’d be typing in “Tyga” and “YG” and get that feel. To be on the same record as these two dudes, that’s legendary. I’m thankful for the opportunity. A lot of people in my situation don’t get these two types of artists—they haven’t even made a song together, and I got them both on my track. I’m thankful for that.

ED: Have you found yourself starstruck yet? And if so, who by?

SNEAKK: It’s been cool seeing LL Cool J and 2 Chainz (he really is that tall!), but the moment I know I’ll be starstruck is when I either see Jay-Z, or if I meet Beyonce, Rihanna, DJ Khaled. Those are people that I’ll study when I’m at home because those are people that are impactful in hip-hop and the world. They’re doing the best of both, so those are the people I can learn from.

SNEAKK: It turns the whole place up. When that song comes on, there’s dollars everywhere. I’ve seen it. It make me want to throw money like it’s not even my song. The energy it brings in the room, is crazy. I would love to see this song in that scenery, it’s perfect for gentlemen’s clubs.