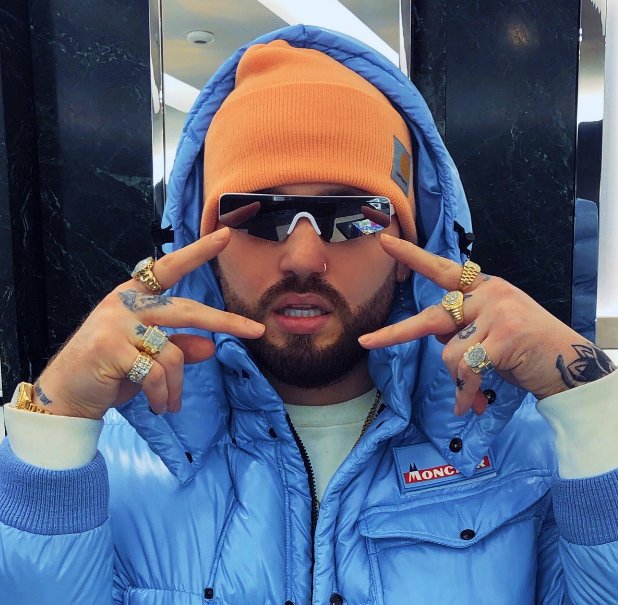 As a child, rapper Gashi lived a transient existence. So it’s no surprise he hasn’t forgotten his road to success.

Looking out into the crowd, Gashi could see snapshots of his baby-self staring back at him. This was success appearing in the form of flashbacks to when Gashi, born Labinot “Larry” Gashi, was traversing Europe with his family, busking to make money and staying with family friends.

Now, Gashi, is a solidified star — he’s worked alongside household names such as The Weeknd and Lana Del Rey and recently was featured in the New York Times.

ED spoke with Gashi about his track “My Year” featuring G-Eazy, the impact that the late Nipsey Hussle had on him and more!

ED: I read about your busking days in Germany — did you imagine then when you were performing the heights you’ve reached now?

ED: Talk about how music helped you assimilate to the U.S. How much did it help to learn English?

GASHI: Music has helped me with everything. It’s helped me lose my accent. Every time I would speak, someone would say ‘Where are you from?’ And I get that now when I’m in L.A., ‘You sound like you’re from New York or some shit.’ I say I’m from Brooklyn. I got so fed up saying things wrong. To this day, when I get angry, you’ll hear me say a word wrong here and there but I try my best not to have anyone ask where I’m from. Just take it for what it is and keep it moving. Listening to my favorite rappers annunciate things, I picked up from that. It’s helped me so much. Music has helped me with my English, it’s helped me learn new words — when I heard a singer say something, I’d try to find out what that word was.

ED: How did you come to work with G-Eazy on “My Year”?

GASHI: G-Eazy was always a fan of my music but we’d never met. I heard through my friend Rory, who was managing YG when they were on tour together, ‘Yo, G-Eazy likes your music.’ I didn’t really believe it. Years after hearing he was a fan, I was backstage with The Weeknd and Lana Del Rey at The Weeknd concert and G-Eazy came in and sat down and introduced himself, like ‘I know who you are,’ and I’m like ‘I know who you are, what’s up?’ We became friends and then we’d text randomly. My manager is best friends with his manager and his manager heard the record and said ‘G needs to hop on this.’ So I said cool, and sent G-Eazy the record. He cut the record and ever since then it’s been boomin’.

ED: Do you find it’s easier to rap about politics, war, refugees, etc. or materialism, money, etc.? I’m just wondering if the thought/creative process is different depending on the subject material?

GASHI: First, I don’t like talking politics. I’m not good at it and I never speak about something I’m not good at or don’t know. What I do talk about is my struggles, my story, my life. Depending on what the beat is, in the recording process I gotta hear the beat and I never write, it’s all one take. I record 10 songs in two hours and everything is one take until I mess up. If I mess up a line, I’ll go back and fix the line, but that’s just the recording process. I just did a song with A$AP Ferg and I’m driving around trying to learn the song.

(Working with) Nipsey Hussle was a turning point in my life because when I did a song with him, that week I dropped out of college. That was the best decision I’ve ever made in my life.” — GASHI

ED: You were kicked out of the house for pursuing music originally, so when did your parents/family start to realize this passion was translating to success?

GASHI: When I made more money than anyone in the house. More money, more problems. I feel like everyone is fighting over me. Cousins are coming out of nowhere. But the day it became real was when I got my dad a BMW X5 M (a luxury SUV). That’s when it was real because I know how much my parents wanted a BMW.

ED: You’ve worked with Nipsey Hussle, so I was hoping you could talk briefly about what it was like working with him and your experience in general from what you got to know about him?

GASHI: Rest in peace Nipsey. I actually am still hurt by it. People tend to speak highly of people when they die, I don’t. That’s not what I do. But I’m keeping it 100 with you, all the way real because honesty saves time. Nipsey Hussle was an incredible human being. He actually was the first artist to do a song with me when no one would want to work with me. He was the first feature I’ve ever done in my entire life. (Working with) Nipsey Hussle was a turning point in my life because when I did a song with him, that week I dropped out of college. That was the best decision I’ve ever made in my life. He was really on to something and had big dreams and was going to accomplish them. He showed me how to make money. I could give you money, but you’re going to come back and ask for money. When you show someone how to make money, that’s how you fix the problem.

GASHI: I find it to be harder. I’m in New York City right now, there are three rappers per building. You can record at your house now.

GASHI: Because I made the song to motivate people and to change people’s lives, no matter what you’re doing, no matter what your hustle is. If your year didn’t start well, you always have a chance to turn it around. So if that girl is dancing, she’s going to say ‘This is My Year and I’m about to get that bag.’ And if that DJ is spinning, he’s like ‘This is My Year, I’m about to turn up.’ And as soon as you play the record, it has a magic to it — it spreads this energy, positivity and it makes everyone throw the dollars up.