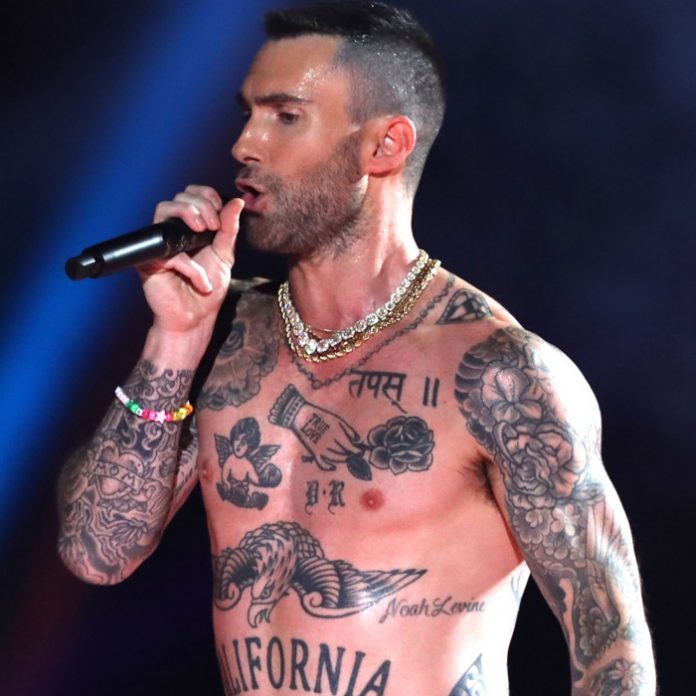 A week or so before the Super Bowl I’m sure Adam Levine’s manager met with him to discuss Maroon 5’s upcoming half-time show, and the discussion probably went something like this:

“So Adam, what do you have planned for the show?”

“Naked? You can’t get naked at the Super Bowl.”

“I’ll just strip down to a really tight pair of pants.”

“But why? Partial nudity did not go well for Janet Jackson.”

“Yeah, but there’s no comparison. Look at this body.”

“But why not keep your shirt on?”

“Because I want everyone to see all my tattoos. Have you seen my tattoos?”

“But I got ten more new ones this week. Let me show you. And look, I got the word ‘California’ tattooed in an arch across by six-pack abdomen just like Tupac had ‘Thug Life” on his stomach. Isn’t that cool?”

“Adam, you’re a nice upper-middle-class Jewish boy from the suburbs. You have your own fragrance line. You do acne commercials. You actually sing, ‘Look into my eyes and I’ll own you with them moves like Jagger’.”

“He was born in London, not in ATL. He’s British.”

“Yes. Listen Adam, be reasonable. Cardi B. has more thug in one of her toe nail clippings than you have in your whole body.”

“Who cares? She’s not on that stage at half time; I am. And I’m taking my shirt off because I got to give the shortys what they want.”

“But what about the guys in the band? What do they think?”

“It certainly was. What do you think of this tank-top I’m going to wear?”

“But Adam, I heard Big Boi, who is performing with you, is going to wear a giant fur coat on stage. Don’t you think having you on stage shirtless and Big Boi on stage in an eskimo coat is going to send mixed messages to the viewers about what the temperature is in the stadium?”

“Who cares? No one is going to be looking at Big Boi if I’m on that stage.”

“Okay, okay you win. Go ahead and get half naked. Now, what songs are you planning on singing.”