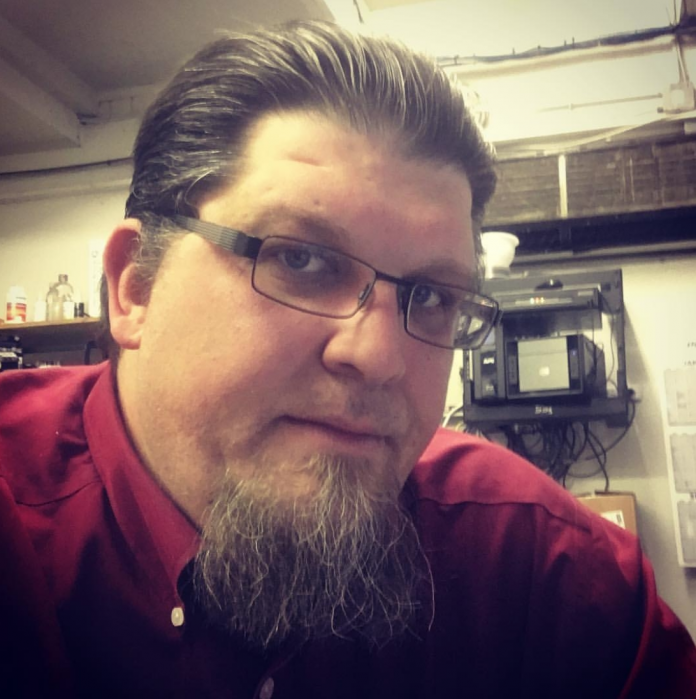 A night at Fantasy Island shaped Jeb Jarrell’s reality and led to a two-decade career in the gentlemen’s club industry. Though a long-time DJ, Jarrell has since made the move over to club management, and now sees the industry through a very different lens.

Jeb Jarrell and his PetCo boss were pounding drinks at Fantasy Island, a bikini bar behind Jeb’s apartment in Santa Monica, California. They witnessed a confrontation between the DJ and the manager of the club.

“The DJ loudly quit and stomped out,” Jeb recalls. “The obviously frustrated manager began attempting to DJ, while I loudly and drunkenly told my boss how I could do that job. Of course, the manager heard me and immediately called me out on it. Egged on by my boss, I went into the booth. Four hours later, I didn’t want to turn the music off. I was hooked, and then the girls tipped me! I quit my job the next day and my old boss became a regular at the club.”

Fate would intervene on his favor again years later when jaded by the late-night DJ life, Jeb craved a 9-to-5 job. So he moved to Colorado Springs in 2015 and found himself working as a dayshift DJ at Deja Vu Showgirls. The CoverJock product (an audio software system that can supplement or replace a club DJ—Ed.) took his job, but a vacancy opened for dayshift manager and Jeb had the chance to transition from DJ to club manager—or as he puts it, jokingly, moving over to the “dark side.”

We had the chance to ask Jeb about his lengthy career in the gentlemen’s club industry, as well as his favorite music to play in and out of the club. Don’t miss Jeb’s personalized Spotify playlist, courtesy of StripJointsMusic.com!

ED: How long did it take you to adjust to your new role as manager?

JARRELL: I would have to say the biggest adjustment I had to make right off the bat was curtailing my excitement to do all the things I always said I would do if I was every the manager. I had the good fortune of landing in a spot that has been well established, so I had to take a step back and learn the systems. I have some amazing upper management that made the whole transition super easy for me, which I am very grateful for.

JARRELL: I like the way you just slip in this question, like its an easy answer! It would take a year of ED Publications’ issues to cover this! If I have only one sentence to impart something on this topic, it would have to be that communication, on both sides, is so vital. Managers and DJs need to always be on the same page for success.

JARRELL: OK, now your just trying to start a fight! They both have very unique challenges that are quite different from each other. But hands down, DJing is the hardest job in the club! You are trapped in one spot for the duration of your shift, while constantly juggling making as many people happy at once, with a laser focus on the stage and crowd, all while trying to pick the next three songs. My favorite thing about being a manager is being able to walk away!

ED: What’s your favorite part of working with a feature when they’re booked at your club? If a club owner asked you why they should book a feature in their club, what would you tell them?

JARRELL: I love the excitement a feature brings to the club! As a DJ, I always loved getting to emcee a feature show because the amazing ladies put forth so much energy in the shows. It makes me pine away for the days before twerking! But my favorite type of feature to work with is a showgirl. I love the way all my entertainers become inspired for weeks by the showgirl shows. They all emulate them a little, which, in my book is just awesome.

Hands down, DJing is the hardest job in the club! You are trapped in one spot for the duration of your shift, while constantly juggling making as many people happy at once, with a laser focus on the stage and crowd, all while trying to pick the next three songs.
— Jeb Jarrell

ED: When you were a DJ, what was your favorite music to play on a busy Saturday night at the club? Conversely, when you’re not in the club, what music do you prefer to listen to?

JARRELL: Anything that is hot and hypes the crowd with some good energy, I will get swept along with it as well. I love the excitement of a popping adult night club! I have never limited myself by a genre, but rather by the energy the song creates. I have had nights where I went from Brooks and Dunn to TuPac, and then right into Pantera, and the crowd on their feet the whole time. Gotta love Texas!

When I am off work I listen to the whole song! (most songs are longer than the three minutes we always play)

JARRELL: Stevie Ray Vaughn, in a small hole in the wall bar somewhere in south Texas. Just writing that gave me chills!

Where do you originally hail from: Denver
Current club: Deja Vu Showgirls Colorado Springs
Years employed at the club: 4
Years in the industry: 23
Favorite recording artist: I can never pick just one
Industry hero: Leo Nathan
Favorite feature entertainer: Are you trying to start a fight?
Favorite DJ or industry pro: You really are trying to stir something up! LOL
Favorite part of your work night: I love whenever its busy in a club! The action is invigorating!
Pet working peeve: Anyone who is LATE
Advice for fellow club DJs: Give a f**k!

Stephanie Wilbanks: Queen of the Pony