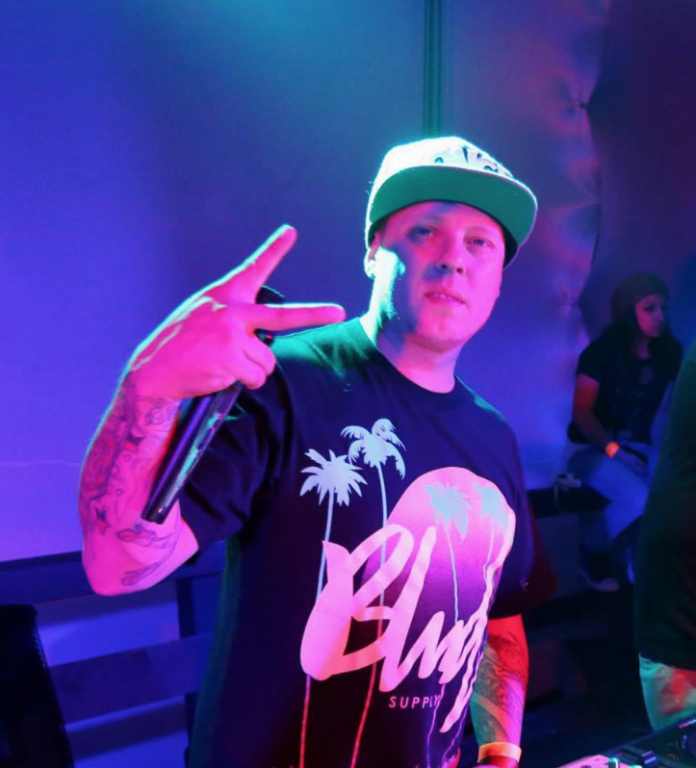 David Hulme appreciates being a lifeline of the club as the DJ.

As a DJ at Bucks Wild Dallas/Fort Worth, Hulme is responsible for whetting the musical appetite of clug goers at any given minute.

“I would not change it for the world,” says Hulme. “I love being able to switch between genres, BPMs and play music from all over the charts from country to hip hop to classic anthems we all know and love. This allows me to keep the diverse crowd we attract happy. I love all music and have always had a good ear for picking out gems in every genre. My experience in night clubs taught me how to play music that keeps people moving and busy, so I try and apply that same knowledge to the adult clubs. Even with customer and entertainer requests — if it is not something that is right for the timing, the club, or is off format — it won’t get played. Bucks really allows me to use all my skills as a DJ. I am very grateful to work in a place that allows me to be creative, stay current, and really put my best into putting on a good show.”

ED spoke with Hulme about his start as a gentlemen’s club DJ, joining the Bucks brand, and his current musical tastes. And don’t miss his personalized Spotify playlist, courtesy of StripJointsMusic.com!

ED: When and where did you start working as an adult club DJ? What brought you into the industry initially, and what made you decide to stay once you got there?

HULME: I started DJing in adult clubs in about 2001 in Portland at the Pallas Gentlemen’s Club. I was dating a girl from the local rave scene who was a part-time dancer. Her boss called me when their DJ no-showed and asked me to come in knowing I was a club/rave Dj and could run a mixing board. I brought all my CDs with me and the girls helped by letting me use theirs and DJed the Thursday night shift. I seem to take naturally to it, and I guess I was pretty good at or better than no DJ at all because they offered me the no-show DJ’s job and I never looked back.

HULME: I think the role I have played mostly is staying consistent as a DJ and helping to find other DJs who do the same thing. I have worked in a lot of clubs over the years. Bucks Fort Worth and Dallas have some of the best DJs, managers, and owners I have ever worked with. You can really only be as good as the team you work with. I am fortunate that I get to work for mighty motivated people who want to be the best. They know it is gonna take a lot of hard work to achieve, but are not afraid of putting in the effort.

Overall, the DJ can have a lot to do with with the success of a club. If that DJ is willing to play his role as part of a team. No one person or position can be individually responsible for success. The more everyone understands their part in making it a working machine the smoother things will run.

“I love being able to switch between genres, BPMs and play music from all over the charts from country to hip hop to classic anthems we all know and love. This allows me to keep the diverse crowd we attract happy.
— David Hulme

ED: As you know, three Bucks clubs are hosting the EDI West contest in April. What do you look forward to about having this national showgirl competition being held at the Bucks clubs?

HULME: I love working with features! I worked at a feature club in Portland for many years and I love the energy and excitement they bring to the stage! I can’t wait to see Mila Deluna again; I had the privilege of working with her at our grand opening in Philly and she is absolutely wonderful. She is drop-dead gorgeous with a great attitude, personality, and work ethic. I was very impressed by her. She put on a big smile and did an amazing show each day no matter what.

ED: If you could change one thing about the strip club industry, what would it be?

HULME: That’s a loaded question with a few different complicated answers. I guess to start, I would like to see more financial education offered to employees and independent contractors. When you work for cash, daily, it is important that you know how to set yourself up for the future. Putting away for things like retirement or illness with long term investments are a must.

HULME: I don’t have favorite music to play on a busy Saturday night because every busy night is different. Every lead-up to where the crowd is really feeling the music you are playing is different. One night it could be house music, the next rock. My goal as the DJ is to find that sweet spot and get as many people as I can feeling the vibe, tapping toes and singing along to the music. If I had to narrow down a favorite it would have to be 90’s throwbacks or house music though.

HULME: I would love to see Daft Punk or deadau5 (his earlier stuff) again. Because they were on the cutting edge of what was happening with EDM, and I love EDM. I’m an old raver so I think about concerts in terms of festival and warehouse parties. Normal concerts are boring to me. I like shows that are more interactive with the crowd. You don’t see too many people sitting down at EDC or Burning Man.

Where do you originally hail from: Portland, Oregon but I’ve been in Fort Worth Texas for the last five years and I’m not leaving.

Years employed at the club: 4.5 years

Years in the industry: 18 years

Favorite recording artist: Too many to name

Industry hero: Scott Discianno; I was in the beginning of my career when I first met Scott. Seeing how far he has come in becoming an industry leader is inspirational.

Favorite industry pro: DJ Platypus from Tootsies. He is much more than just a DJ to RCI and Tootsies. They really value his opinion and wealth of knowledge. He is always trying to do things to include DJs and build them up more as a position of importance and has the respect of many.

Favorite part of your work night: Power hours; Midnight -2 am. Because it is go time and we are in full tilt everyone is busy and the energy levels are at its highest.
Pet working peeve: Excuses. Don’t make excuses, just own up to mistakes and try to not repeat them.