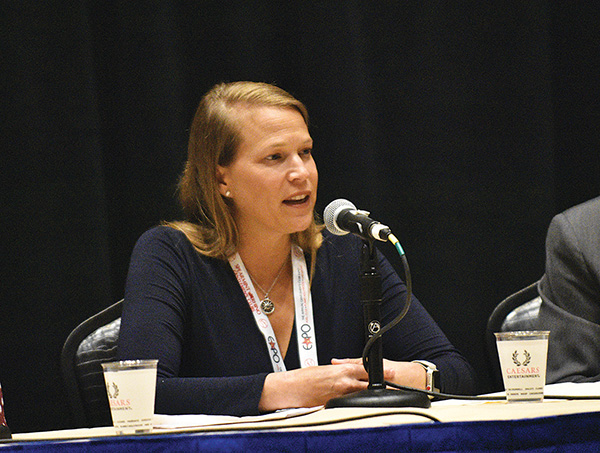 The Expo 2019 Legal Panel tackled the expected national impact of the California State Supreme Court’s landmark 2018 Dynamex decision and its ABC Test that redefines how businesses are to determine whether individuals traditionally classified as independent contractors such as delivery drivers, Uber/Lyft drivers, hair stylists and yes, exotic dancers are to be classified. ABC Tests will almost certainly spread like wildfire to other states and are likely to permanently change the face of the industry, as we know it.

The Legal Panel assembled a top labor attorney, Tammara Bokmuller, who is currently handling California wage-and-hour suits, which include an analysis of Dynamex, two leading California adult nightclub operators, Joe Carouba and Kathy Vercher and moderator Larry Kaplan, an industry veteran, to talk about the substantial impact the Dynamex decision has had on California venues, what steps they’ve taken and will take as they now classify their entertainers as employees, what club operators in other states might expect with the likely arrival of Dynamex-like ABC tests.

In the first part of this two-part article, the panel explains the Dynamex court decision and its ABC Test, legislation to codify the ABC Test into law and its origins in the labor movement, how some California clubs have completely changed their business models and the impact that has had on them.

Tammara Bokmuller explained that the Dynamex decision changed the method for determining whether someone is an independent contractor or an employee in California from the “Borello Test,” which weighed and balanced 11 factors, to the three-prong ABC Test, which requires meeting all three prongs (a lack of control; providing a service outside the normal course of the hiring entity’s business; the worker having an independently established trade, occupation or business) to qualify as an independent contractor.

“The problem with the ABC Test,” Bokmuller noted “is unlike Borello, there’s no wiggle room. If you don’t meet every single prong, that person will essentially be an employee.” She added, “All is not lost, but it will be more difficult to challenge.”

“We converted one club first, to make sure we were organized. It worked, but it’s been really challenging. After years of, how many customers through the door; how many dances did you do, and everything else worked itself out, it’s now explaining breaks, clocking in and out, sales quotas; it’s a whole new business. It’s working, but it will continue to evolve.” – Spearmint Rhino’s Kathy Vercher

Bokmuller explained a bill, AB5, currently in California’s legislature to codify Dynamex into labor law. “All we have now is a court decision. AB5 would make that decision a law that another court cannot come in and overturn.”

Bokmuller noted AB5’s roots in the labor movement and why similar bills will likely be introduced soon in many more states. “The bill’s author is a congresswoman who was previously involved in the labor movement. While they say this bill protects workers,” cautioned Bokmuller, “in my personal opinion, this is about the bottom dollar. The states wanting their money in employment-related taxes, and this will get them their money.” She added, “With this being led by the labor movement, I can’t imagine other states won’t follow.”

Bokmuller explained that some professional services that will be exempted from AB5 including lawyers, financial advisors, salespeople and hairdressers. She noted that some have questioned whether exotic dancers could be exempted as salespersons.
“Based on what I’ve seen, though I don’t believe there is a plausible argument, it’s certainly worth looking into and the bill isn’t finalized yet.”

Panelists Joe Carouba and Kathy Vercher are both industry veterans and Exotic Dancer Hall of Fame inductees. Carouba is the founder and managing member of BSC Management, which has consulting contracts with 10 San Francisco clubs. Vercher is the President of the Spearmint Rhino club chain, which owns and operates 17 US clubs.

Carouba and Vercher explained what it was like when they converted their club entertainers to employees. “It’s been challenging,” observed Carouba. “We converted all 10 clubs the same day, close to a year ago. It’s been an interesting ride and I’d still consider it a work in progress.”

“I would share that sentiment 100%,” noted Vercher. “We converted one club first, to make sure we were organized. It worked, but it’s been really challenging. After years of, how many customers through the door; how many dances did you do, and everything else worked itself out, it’s now explaining breaks, clocking in and out, sales quotas; it’s a whole new business. It’s working, but it will continue to evolve.”

Communicating the overnight change to employees presented hurdles for Carouba and Vercher’s clubs. “We trained our GMs, who communicated the change to staff and entertainers and put up posters,” explained Carouba. “Because it’s impacted dancer incomes, it’s also impacted staff incomes.”

“Once you look at the totality of the circumstances, business decisions had to be made. Club operators with one or two clubs may choose not to convert and that’s their choice. And there’s a possibility they will get around it. However, be prepared, you’ll likely be the next target defendants. And it’s an expensive prospect.” – Tammy Bokmuller

“I got a team of veteran employees and entertainers on board first to help with the transition,” said Vercher. “Then I took district managers and HR and payroll people and went club-by-club so we could do a lot of hand-holding to share the details. “Any change is scary but everyone was somewhat accepting of it,” explained Vercher. “Immediately, we lost probably 20% of our entertainers who said it’s too complicated for their independent lifestyle.”

Carouba noted, “What’s really happening with the employee model is that while your club looks the same, you’re really running a completely different business. The administrative side is much more robust.” He added, “This industry was pretty simple, the club with the most entertainers won. But with an employee model, it doesn’t work like that. The club with the most entertainers is now losing money because the entertainers aren’t producing enough income to pay for themselves.”

Carouba explained that with the conversion, they lost a lot of entertainers, but those were low earners they would have had to let go, anyway. “AB5 is supposed to protect entertainers. But we’ve had to let 35% of our most vulnerable entertainers who weren’t producing go,” noted Carouba. He explained that any minimum-wage employee, including dancers, earns $15.89 per hour, plus ACA, social security and Healthy San Francisco. Altogether, it’s costing them $25 per hour.

How has this new business model affected the clubs’ ability to maintain strong rosters of dancers? “The high-earners are the ones you have to try to protect,” noted Carouba. “A lot of our best entertainers fled to Vegas; some have filtered back. We’ve set up a payroll with a daily cash draw done for our high-earners, allowing them to pocket cash every day. That seems to have helped retention.” Carouba added, “Some clubs are putting 100% of earnings into their paychecks. That seems a little more challenging for retaining top entertainers.”

“We still have the same number of entertainers for the busy shifts,” explained Vercher. “It’s the moderate shifts where I’m seeing the impact. She noted, “What’s challenging if you’re trying to go off of the per-hour and breaks and manage how many dancers that shift can afford, it’s difficult to balance that, when as you know, one or two customers can change everything and then you didn’t have enough girls that day and you overload the next day and don’t need them. We’re still going through it and learning every day.”

Some California adult club owners believe Dynamex doesn’t apply to them. Could they be correct? “It’s a California Supreme Court decision that applies to every California business,” explained Bokmuller. “But let’s be clear: Dynamex doesn’t say you must convert your entertainers. It’s actually about a completely different industry. It’s my understanding Kathy and Joe’s clubs have converted, not because of this decision but because they’ve been targets of greedy plaintiff’s lawyers for the past 10-20 years.”

Bokmuller added, “Once you look at the totality of the circumstances, business decisions had to be made. Club operators with one or two clubs may choose not to convert and that’s their choice. And there’s a possibility they will get around it.” Bokmuller cautioned, “However, be prepared, you’ll likely be the next target defendants. And it’s an expensive prospect.”

In the second part of this two-part article, the panel will talk about the other states already utilizing an ABC Test for wage and hour purposes, whether clubs can allow entertainers to work both on and off of the clock and exposure to penalties, required breaks for employee entertainers, harassment, discrimination and CYA, the upsides of employee entertainers and where they see the industry in 3-4 years.

This article briefly summarizes extremely complex legal issues and is provided for general information purposes only and is not intended to provide either an exhaustive analysis of these matters or any specific legal advice or recommendation. Laws vary by state and municipality. The positions and opinions expressed by Tammara Bokmuller are hers alone, and do not necessarily reflect those of ED Publications. Club operators and others are strongly encouraged to consult their own attorneys and accountants for specific advice on how these issues will affect their businesses and what measures to take. Larry Kaplan and ED Publications do not guarantee the accuracy of this information.

Tammara Bokmuller is a partner with the Bowman and Brooke Law Firm with offices in 13 cities. Ms. Bokmuller has extensive employment law experience handling a myriad of employment disputes for corporate clients as well as working with clients to evaluate corporate practices and provide strategic recommendations for better management of employee relations. Contact Tammara Bokmuller at (619) 376-2535 or email Tammy.Bokmuller@bowmanandbrooke.com.

Larry Kaplan has for 19 years been the Legal Correspondent for ED Publications. Mr. Kaplan is a broker in the sale and purchase of adult nightclubs and adult stores and the Executive Director of the ACE of Michigan adult nightclub state trade association. Contact Larry Kaplan at 313-815-3311 or e-mail larry@kaplanclubsales.com.