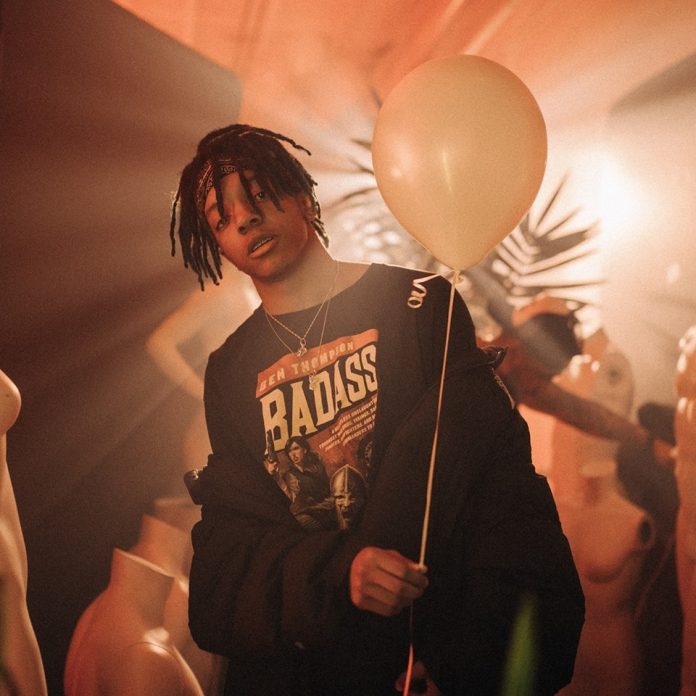 A girl Kevin George knew from a camp he was counselor at had told everyone “Mr. George sings.”

“I come in one day and the whole camp is dancing to my song,” recalls George. “That inspired me, because I felt like an artist. I had to deliver and I went home and made the song everyone knows me for, “High Like This.”

George, 20, hails from Connecticut and trained on the piano and guitar before delving into rap.

ED Magazine spoke with George about his original first love, his musical influences, and, of course, his camp days.

ED: Was football your first love? What position did you play? Whose career did you want to emulate? What was your team?

GEORGE: Yes, I wanted to be Neon Deion. I wanted to be Deion Sanders. That was my guy. His speeches, his work ethic — playing two sports — that was the guy I modeled my whole life after. I was a (defensive back) and slot (receiver) when I got older. But mostly it was running back and defensive back as a kid. When I got older and everyone got way bigger than me, I had to go slot.

My pops was born in Boston, so I grew up a Red Sox fan. He never really liked the (New England) Patriots, but I was born around the time they were on this reign. My Mighty Mites team was the Stamford Patriots, so by default that was my favorite team. I’d wear blue and red to practice and see them on TV smacking everybody.

GEORGE: Considering what it is now and how deeply I’ve fallen into music and what this is and the ideas and perspective I have on life now, I probably wouldn’t trade it. I’ll always have music forever. Maybe I may trade going Division I and having a five-year career and then going into music.

ED: In your bio link you mentioned you don’t see a 20-year-old black kid from Connecticut playing guitar and piano often and that you never thought you’d be here a few years ago… what kind of resistance did you face as you were coming up?

GEORGE: Stamford is pretty diverse, but I grew up in a pretty urban scene. I was always interested in new sounds. I was raised in a household that was predominantly hip-hop and gospel music. I did lean toward gospel music after a while, but on the other end my brother was listening to 50 Cent, G-Unit, and that was stuff I already loved. When I listened to the radio and hear other records, be it Katy Perry or Bruno Mars, I’m just like ‘What is this?’ And I’d go and write down lyrics. I wanted a guitar so I practiced guitar. As a kid, I was just curious about other sounds.

A lot of black kids used to say ‘You’re playing white people music.’ I heard ‘white people music’ a lot. It was the most stupid shit. As I do research, I see a lot of these musicians were inspired by blues, African-American guitar legends. It’s like I knew not to take it to heart.

I come in one day and the whole camp is dancing to my one song … That inspired me, because I felt like an artist. — Kevin George

ED: J Dilla, Kanye West and Mac Miller were sited on your bio as direct inspirations, what was it about those artists in particular? What tracks or albums, specifically, did you turn to?

GEORGE: Dilla was the producer everyone talked about, his sonics, his attention to detail. Kanye was the guy I gravitated toward when I first started making beats, studying his sounds, his stories, his old interviews. Mac Miller was the rapper who made me feel like I can be a rapper. I’m a 15-year-old kid and at the time I was transitioning from an athlete to sitting inside making raps all day. I see an interview with Mac Miller and he’s talking about how he started at 15 and that sparked something in me.

ED: You took up a gig as a music teacher — was there a specific lesson you remember? Was there something technically — or maybe something interesting academically — about music you learned you may not have otherwise?

GEORGE: I started music and I didn’t apply for any colleges. I had this ego that music is going to save my life. Eventually, there’s a side to you that’s like ‘Just work a little bit.’ I was working at an ice skating rink, this spot, that spot. It came to the point where my dad was like ‘I have this job for you, you teach kids about music.’ It was $50 an hour for two hours a week. I designed my own curriculum. I was going in there and breaking down songs, like Shawn Mendez, Kanye, Beatles. It helped me because I wasn’t really writing at the time. I was just studying.

ED: How does “My Darlings A Demon” represent your growth as a musician since “Hopeless Romantic”?

GEORGE: It shows a lot because “Hopeless Romantic” is solely by me and my cousin, J. Liv. With “My Darlings A Demon” I got super collaborative. I got a homie who did three years at Berkeley College. Bringing him in and having him on guitar, him coming up with melodies, chord progressions. Me bouncing out with him, I really grew as a producer. Even having a ton of ideas on the table, I just have to know where to put everything. So I learned a lot.

GEORGE: It’s going to get all the booties popping! The falsetto is sexy. It’s inspired by like ‘09 Dream. It’s super fresh for today’s strip clubs!