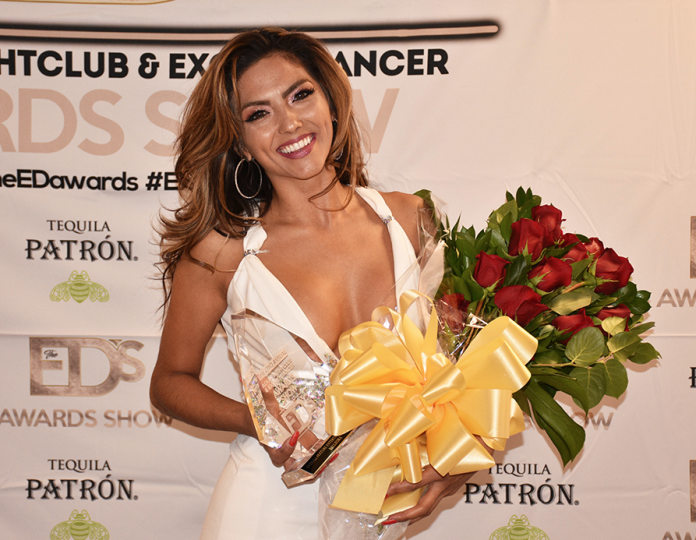 Celebrating the best-of-the-best in the multi-billion-dollar gentlemen’s club industry, the Annual Adult Nightclub & Exotic Dancer Awards Show—better-known as the ED Awards Show—was held once again during the Gentlemen’s Club Owners EXPO in Las Vegas and was presented in a Brand Education Partnership with Patron Tequila. Still the only international awards show dedicated exclusively to this industry, these awards rank as the industry’s most prestigious for clubs, entertainers and club staff.

In 2019, the evening’s big winners included Sapphire Gentlemen’s Club in Las Vegas, the Overall Gentlemen’s Club of the Year; RCI Hospitality/Rick’s Cabaret, the Club Chain of the Year; and Bellzora, the Overall Feature Entertainer of the Year. The show was held at the impressive Criss Angel Theater inside Planet Hollywood and was hosted by Comedy Central star and top comedian Chris Distefano. The show also included command performances by the three Overall Entertainer of the Year nominees Bellzora, Justice and Shar Zayn.

“We were very gratified to hear how many of our Awards Show guests enjoyed the show, especially our comedian Chris Distefano and the entertainer nominee performers,” says ED Publications Associate Publisher Dave Manack. “It was one of the most seamless Awards Shows we’ve had in 22 years of producing this show, and it set a standard for years to come.”

The complete list of ED Award Winners is attached below. For more information about the Annual Gentlemen’s Club EXPO, please visit theEDexpo.com, email dave@edpublications.com or call (727) 726-3592.

(All photos by Tim Hubbard unless otherwise noted)

Here is the complete list of 2019 ED Award Winners:

Club of the Year East
The Penthouse Club, Baltimore

Virgin’s purchase of Hard Rock will NOT impact Expo

The Dynamex disaster — and you