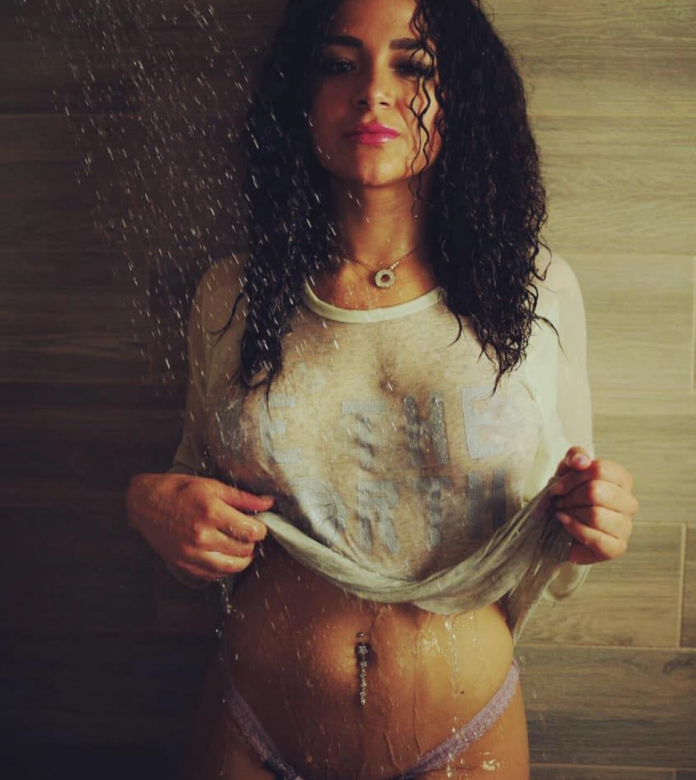 A lot of Americans don’t make it to Canada, specifically the province of Ontario. That means they don’t see the glaring and/or subtle differences in culture. An even finer line of differentiation exists in the gentlemen’s club industry.

Cassius Chay is well versed in the culture of both U.S. and Canadian gentlemen’s clubs. A feature dancer hailing from Windsor, Ontario, Chay has danced her whole career in Canada, but she has also witnessed the best U.S. gentlemen’s clubs have to offer, having competed — and won! —  at the 2019 EDI West in Dallas.

ED caught up with Chay for enlightenment on the difference between Canada and the U.S., her extensive dancing background and winning Newcomer of the Year at the EDIs.

ED:  How long have your been a dancer in strip clubs? Where was the first club where you danced, and what was it like the first few times you went on stage in a club?

CHAY:  I have been dancing in the strip clubs since 2013. My first experience was in Windsor at Leopards Lounge. It was really fun!

CHAY:  The biggest difference I see is the culture of throwing bills is heightened in the U.S. vs. Canada. In Canada, they tip, but in bigger amounts (5s, 10s, or more at a time) vs. the US where they tip tons of 1s! Pretty cool both ways. Alberta has the loonie toss, which I enjoy because we get to know the customers and interact.

Also, depending where you go in both countries, some clubs have more showgirl-based, multi-skilled dancers with bigger costumes and sets, then some clubs have girls that love to shake it and pole dance specifically-both are beautiful and fun!

There’s a lot of beautiful women everywhere, however, the U.S. is just BOOTYLICIOUS! I love women with curves, as I’m curvy. There’s a lot more curvy dancers in the U.S. from what I have seen. That is what makes me different in Canada.

ED:  What is your background as a dancer in general? I see that you are also a belly dancer. Talk about that part of your dancing career; how long have you been doing belly dance?

CHAY:  I started to study the art of belly dance at 12 years old, and continued to teach fitness belly dance classes and do more dance training in ballet, soca (Caribbean), and salsa dance. Then as I grew up, I fell in love with the strength that pole gave me and incorporated all into my nude shows.

I now have my own company www.ChayKit.com – Belly dance entertainment (for weddings and parties), lessons and online fitness coaching.

ED:  How would you describe your “personality” as an entertainer and what are some of your favorite “shows”?

CHAY:  Some people refer to me as bubbly and playful-romantic, girl next door. I love teasing and I love to dance!

I love drama and comedy the most. Some are:  The Get Down, Grace and Frankie (I know right?!), Lucifer, Star, Vikings, Scandal, and You. I also love documentaries and YouTube. I have yet to watch Game of Thrones, I’m saving it for my vacation time — to binge watch!

ED:  You recently won the Newcomer Division at the EDI West contest. How would you describe the experience of competing in the EDI, and what it may do for your career as an entertainer?

CHAY:  The experience was outstanding! I felt like everyone took care of one another and we made a killer show! It made a difference in my career because I have another reputable title, plus the experience of traveling to dance in another country/state than what I’m used to. Very fun! The best part was the connections I made with other people in the industry.

ED:  What are your favorite types of music to dance to? Conversely, what music do you listen to when you aren’t working a club?

CHAY:  I listen to literally everything! There’s a time and a place for certain types of music. To dance to:  Reggae or house, it truly depends on the beat as a belly dancer. I love instrumentals, like classic rock and roll. I love lyrical geniuses like Lil Wayne, Snoop or Eminem. I love a good deep house beat. I listen to music that makes me feel high! It just gets my brain to signal my body to move. The music controls my body and tells me what to do. I also love psychedelic-based music, or Lo-Fi Chill Hop when I’m not working.

There’s a lot of beautiful women everywhere, however, the U.S. is just BOOTYLICIOUS! — Cassius Chay

ED:  If you could see a concert of any musician or band, living or deceased, who would it be and why?

CHAY:  This is a very, very hard one. Because I’m from Motown, James Brown and Micheal Jackson would be up there. I would see Queen, Lenny Kravitz, Tyga, Mygos, xxxtentacion, Post Malone, Drake, Led Zepplin or Pink Floyd, Bob Marley, Nikki Manaj, DJ Snake, Lindsey Sterling, Skrillix, Ariana Grande and anyone I have mentioned before this – there’s so many!

Where do you hail from (born and raised):  Windsor, ON, Canada

How many years have you been dancing:  Nude-6 years

How many years have you featured:  4 years as a feature

Favorite type of music:  All

Favorite song to listen to:  One of my favorites is “Smile” by Snoop Dog

Favorite club manager:  This is a hard one. They all take care of me so well.

Favorite part of your work night:  During my late show and it’s crowded, people are watching every move, tipping big and appreciate my art. Also when my friends and familiar fans come and support!

Advice for new feature dancers:  Save your money, stay clean and healthy. Always invest in yourself, always have a side hustle.

Get to know Jessey Lee of Religion Tequila!