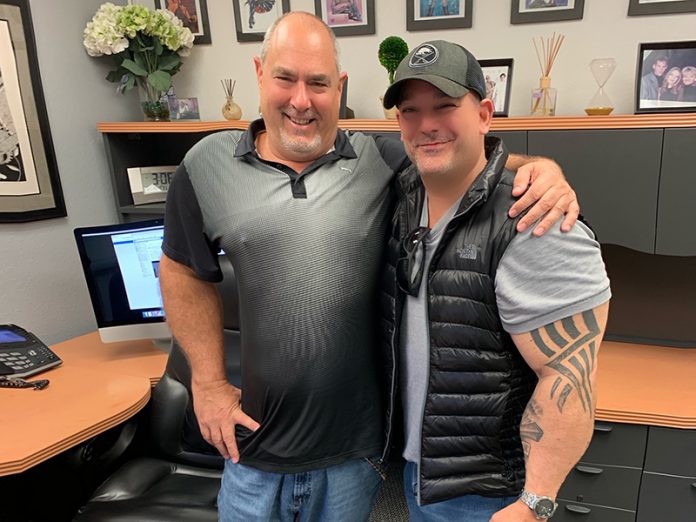 No, neither my arm nor Chris London’s arm look like what you see in the photo above. We are not modern day versions of Popeye.

Chris Photoshopped the photo before sending me a copy after he stopped by the ED offices on a recent trip to Florida. The photo—at least the modified version of it—sums up what type of person Chris London is.

Which is a good thing.

I was sitting on a barstool at an old saloon in New York City once with my daughter. It was one of those bars that have been an institution in the neighborhood for a century or more, where the real wood of the bar top has been polished by the elbows of tens of thousands of thirsty drinkers. I was pontificating loudly at length on various subjects and ordering more than my fair share of Johnny Walker Blacks. When I went outside to smoke a cigarette, the bartender came over to my daughter.

“They don’t make ‘em like that any more. He’s a real character.”

Which was one of the best compliments I have ever received.

That’s one of the reasons I so enjoy this industry. It’s full of characters. Over the past quarter-century business associates have become good friends because, well, they are characters, and, as they say, birds of a feather flock together.
I’m talking about people like John Cornetta and Jack Pepper and Jerry Westlund and Slim Baucom and Gary Santabarbara and Larry Kaplan and the three bald Bass Brothers, to name a few.

And, of course, there’s Chris London.

The first time I met Chris it involved a huge red Cadillac, an even huger joint of Texas dirt weed, and 30 half-naked entertainers at the late Jack Galardi’s ranch outside of Atlanta.

“The best DJ in the country.”

No lack of confidence there. Chris was, and still is, one of the Original Gangsters of the strip club DJ world. He’s DJed at clubs across the country, but has spent most of his time working for the Pure Gold club chain in the Carolinas, first for the late Jerry Reid (another true character) and then his son, Jerry Reid Jr.

Chris was instrumental in getting the EXPO to feature DJ Panel Sessions; he was our go-to emcee for evening parties and the bikini contest at EXPO for many years; and he authored DJ columns in ED Magazine. He even wrote a book about how to be a great DJ and sold copies at the EXPO.

Chris is the human version of the Energizer Bunny. He’s always got something on the burner. He recently opened a gourmet coffee shop, and over the years I’ve know him, he’s published an entertainment magazine in his city; produced an awards show for the city’s top restaurants and nightclubs; opened several we-buy-gold stores; launched several business websites; and helped coordinate his son’s incredible hockey career, all while continuing to play music, corral entertainers and motivate customers at some of the country’s top strip clubs.

On his recent visit, Chris told me he is thinking about writing a tell-all book about his years in the adult nightclub industry, to which I said, “Sounds great, but can you do me one huge favor?”

The reason I say that is because of the smirk.

Look at the photo above again and check out that smirk on Chris London’s face. I’ve seen that smirk so many times over the years. When you see that smirk, you know Chris is most assuredly listening to the devil on his left shoulder and not the angel on his right shoulder. It’s a smirk that can get the smirker—and anyone who happens to be with him—into a world of trouble. Or a world of fun. You just never know which one it will be.

“You mean like the night we were loaded off our asses at four in the morning at Caesars, betting $500 a hand on blackjack?”

“Or what about that night when we…”

I hold my hand up.

Chris London smiles. And then smirks.