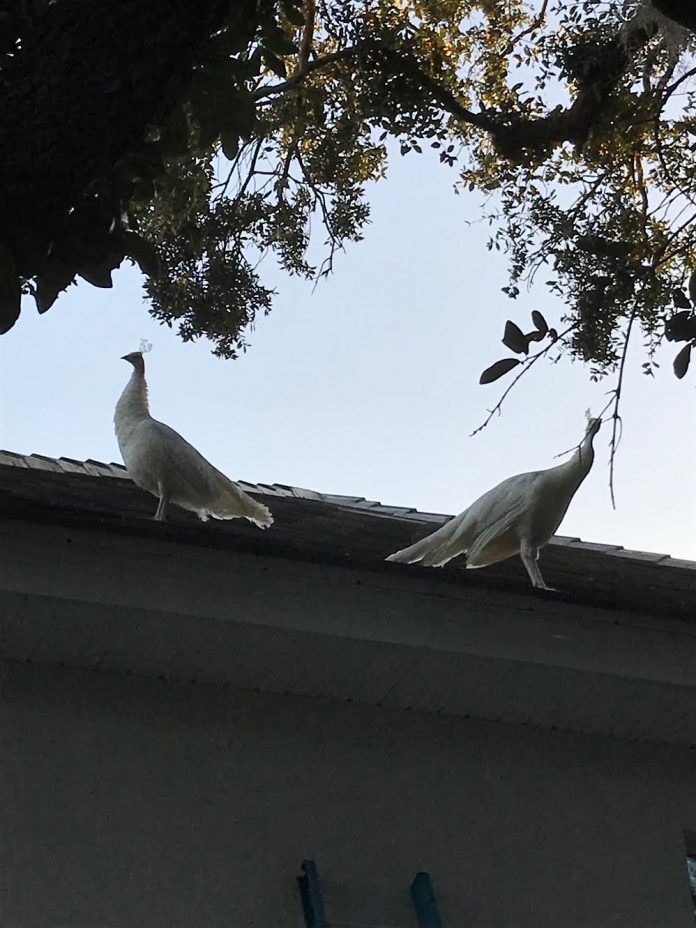 So the time we think it is, is not necessarily the time they know it is.

Bonnie and Clyde are peacocks. Snow white peacocks. Quite stunning to see.

Technically, they are my peacocks. My daughter got them for me for my birthday last year. Don’t ask.

When we got them, they were tiny. You could almost hold them in the palm of your hand. Now they are about three feet tall.

We kept them penned up for the first nine months of their life. It was for their own protection. There are coyotes and bobcats in our neighborhood. We live in a little pocket of country in the middle of Tampa-St. Pete. A mile away is a Publix and a Starbucks, but where we live it looks like Mayberry RFD.

We had to wait until Bonnie and Clyde were big enough to fly into the trees to escape predators. When we let them out of the pen the first time, they were timid and stayed near the pen. Now they have the run of the neighborhood and can fly short distances, even from the ground to the roof of our two-story house. Their favorite spot is the top branches of a huge oak tree outside our kitchen window where they perch for a few hours every night.

They go everywhere together. You never see one without the other one being nearby. We think they are a male and a female, thus their names, but we could be wrong. If one day we see them being trailed by a tiny snow white peacock, we’ll know the answer.

They were my birthday gift, but over the months my wife became more and more attached to them, and now she handles the feeding and watering of them. We leave the pen open so they can get to their food, but they don’t sleep in the pen. In fact, we have no idea where they go during the day or at night. Maybe they have a job somewhere.

We only see them once a day when they come back to our house and the food in the pen at exactly 5:30 pm every single day. They are always on time. Not a minute sooner, not a minute later. At 5:25 pm my wife goes outside and waits for them, and then throws them dried mealworms for a treat when they swoop into the yard on those big white wings.

A week ago she was in a tizzy because 5:30 pm came and went and there were no peacocks.

At 6 pm, still no peacocks.

At 6:15 pm she said, “I think the coyotes got them.” She came back in the house visibly upset.

Because daylight savings time does not exist in their world.

Bonnie and Clyde were on time.

The time of nature, not the time of man-made clocks.