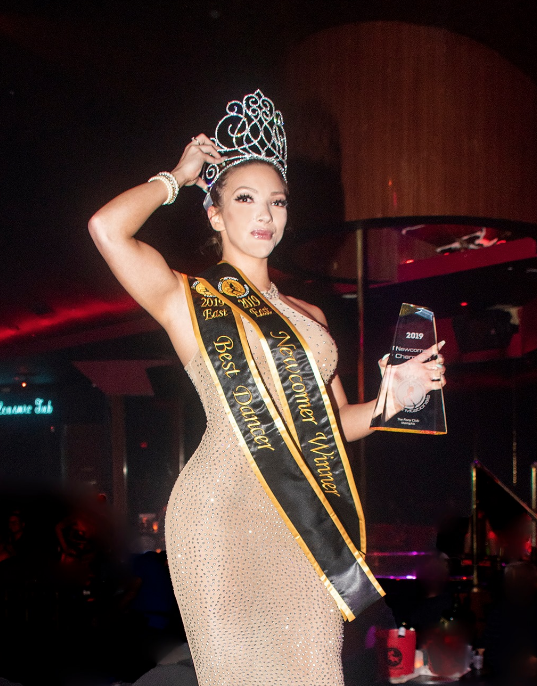 Somebody let Belinda Carlisle know. Heaven is on Earth.

Heather Heaven has burst onto the feature entertainer scene like a supernova from on high, nabbing the crown in the EDI East Newcomer Division in June. For many entertainers, that caps a year. Slip on the tiara and rest on those bedazzled laurels.

Instead, Heather followed that performance up by winning Miss ExoticDancer.com and most recently placing third at the Pajama Jam and $10,000 Lingerie Contest presented by Religion Tequila at the 2019 Gentlemen’s Club EXPO at Planet Hollywood.

ED Magazine spoke with Heather Heaven to figure out how the US compares to her homeland when it comes to gentlemen’s clubs, her stage personality and her successful turn at the EDI East in Memphis.

ED: How long have you been a dancer in gentlemen’s clubs? Where was the first club where you danced, and what was it like the first few times you went on stage in a club?

HEATHER: I’ve been dancing on stage for four years now. I did an amateur contest at the Fox Showroom in my home town, got hired to go on circuit and the rest is history.

ED: How different is dancing in Canada compared to the US? And how different are strip clubs in different parts of Canada?

HEATHER: Western Canada has a unique set up for their clubs. Everyone who does stage gets paid —rookies to features — and travels on a circuit of bars, usually spending a whole week at each bar with a lineup of 4-15 girls for the week. Stage shows are 18 minutes long, full nude. You get your paycheck for stage shows at the end of each week, and get to keep all your tip and private dance earnings on top of that.

East coast clubs (Ontario on) resemble the states more with clubs having lots of girls to sell dances. Going on stage is mandatory but you don’t get paid for stage unless a Feature entertainer is brought in by management.

ED: What is your background as a dancer in general?

HEATHER: I grew up dancing. In high school, I went to a school with a dance academy program. We would spend two blocks each day dancing.

ED: How would you describe your “personality” as an entertainer and what are some of your favorite “shows”?

HEATHER: Bubbly, sexy, fun! Every show is a high-energy, interactive party from start to finish.

My favorite shows are any time I perform with fire, there’s something so primal and sexy about it.

ED: You won the Newcomer Division at the EDI East contest. How would you describe the experience of competing in the EDI, and what it may do for your career as an entertainer?

HEATHER: Being awarded the opportunity to compete in the EDI East was a dream in and of itself. Winning? Unreal. I felt the love from everyone involved in the EDI and ED Publications immediately. Being involved with this awesome group of individuals has already brought me great exposure, new opportunities, lots of new industry friends and connections.

HEATHER: What I dance to really depends on what costume/show I’m doing. Pink pirate? EDM nurse? Classic rock. When I’m not working in a club, I’m probably looking for new music for the club haha.

Where do you hail from (born and raised): Victoria, BC, Canada

How many years have you been dancing: 4

How many years have you featured: Just under 2

Favorite type of music: Anything with a good beat

Favorite song to listen to: Don’t make me choose!

Favorite DJ or industry pro: DJ Kevin at The Caddyshack

Pet working peeve: Negative Nellys. There’s no place for that in the club.

Advice for new feature dancers: Observe everything, listen, be humble. always do your best, even for a small crowd — you never know who’s watching. Stay positive and shiny!