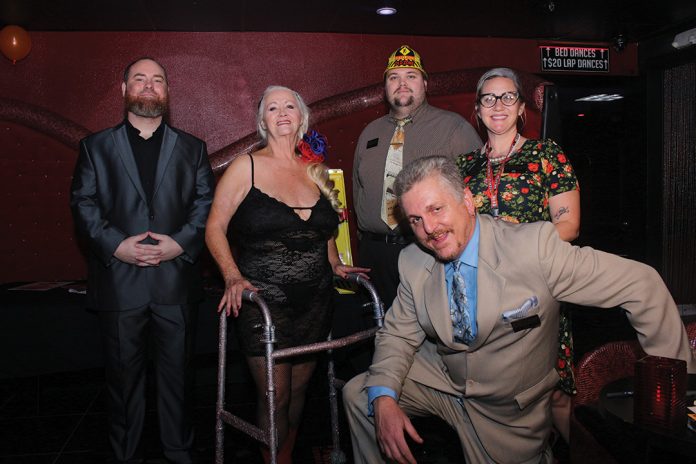 A particular conversation took place in the hallways of an adult nightclub that, as a promotional stunt, had placed a picture of a dinosaur in a bikini:

Gentleman: ‘Ma’am can you help me?’
Lady: ‘Help you with what?’
Gentleman: ‘Can you show me the one that’s a dinosaur? Me and my buddy have been wondering what she looks like.’
Lady: ‘Well you don’t have to look far.’
Gentleman: ‘Where’s she at?’
Lady: ‘You’re talking to her.’

The “dinosaur” was none other than 74-year-old Lotta Topp, a feature entertainer that performed at Little Darlings Las Vegas from Sept. 29-Oct. 1.
“It was a blast, possibly the best feature we have had in a long time,” says Kristi Flores Ramirez, Special Events Coordinator for Little Darlings Las Vegas. “The guests had a great time.”
Her appearance was by virtue of being booked by another industry veteran, Eleanor Bucci, founder of Universal Entertainment (now Centerfold Strips).
In fact, Bucci and Topp’s relationship reaches back roughly 40 years. After Topp’s 20-year retirement in 1994, their paths crossed again and Bucci dropped a surprise on Topp by just booking her.
“I was a little nervous,” says Topp about being pulled out of retirement. “I did one show and (Eleanor) said everybody liked me, so I’ve done about four or five shows of them since then. I’m the oldest one left, supposedly.”
Topp started as an entertainer in 1966 in Denver. She says she used to fall onstage every time for a long time before she finally broke the habit. Before she adopted the name Lotta Top, she went by the stage name Faye Harlow. One of her memories on the circuit is of following Sally Rand—a burlesque dancer renowned for her fan dance and balloon bubble dance—at the 400 Club.

“At my age, I’m not expecting a whole lot,” she says matter-of-factly about her routine now, adding that she is perfectly content being a draw based on age. “I just feel lucky being out there. I might as well do it while I can. To me, the stage is—I just feel good up there. I just put on a show the best I can and have fun with the crowd. I enjoy it. I miss it. I wish I could do it every week like some of these other girls.”
Part of what still drives Topp is her personality. In addition to being a self-described people person, she also appreciates the art of performing, specifically comedically.
For her Little Darlings performance, she wasn’t shunning her age but rather embracing it. She came out on stage with a walker, her hair put in rollers and red boots.
What song was playing in the background? But of course, “These Boots Are Made for Walkin’” (which coincidentally came out in 1966, Topp’s first year as a performer). From there, her next number was Patsy Cline’s “I Fall to Pieces,” and involved her throwing things out into the audience—chattering teeth, pairs of glasses, a hand, a foot, and some breasts made out of nylon hose.
Much like the crowd, the other girls also shower Topp with appreciation.
“They come up to me and say ‘I love the way you come out onstage,’” Topp says. “One girl told me, ‘I’m going to tell my grandma she can still get out there!’”
Speaking to Topp on the phone, it’s clear and refreshing how self aware she is. While the aspect of entertaining may still give her butterflies, Topp counters candidly, “What have I got to lose? My sister asked me ‘What are you going to do if they boo?’ I’m going to boo back because I’m going to the bank.”

For booking information on Lotta Topp, email info@centerfoldstrips.com or call (877) 427-8747. 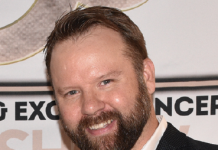 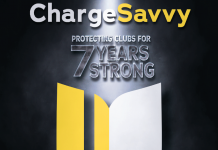 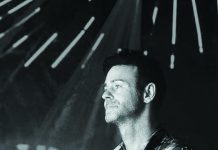