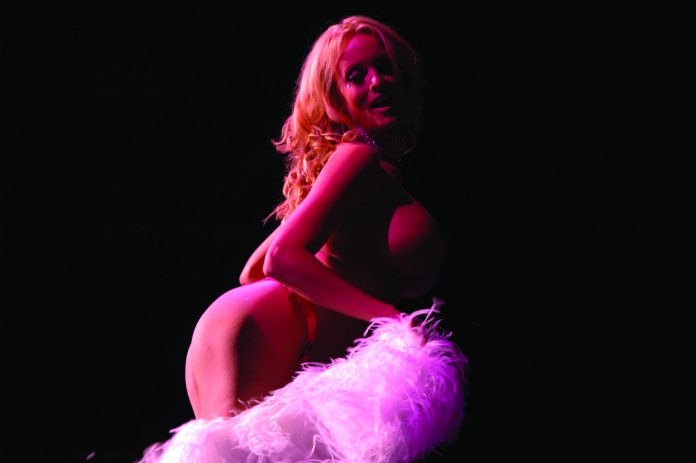 Though she was in Illinois for a booking with the Deja Vu Showgirls club chain, Stormy Daniels made a brief-yet-important stop at the State Capitol in Springfield on Friday, March 22nd. There, standing under a statue of Abraham Lincoln, Stormy made an impassioned speech against the “pole tax” that’s been imposed upon all of the gentlemen’s clubs in the state.

“Funding rape crisis centers by taxing strippers, mostly young women, often young mothers, is simply cowardice and wrong,” said Stormy to the crowd that had gathered to hear her and the hundreds of protestors who had gathered at the capitol (as reported by the Rockford Register Star).

Stormy also declared that there is no evidence linking strippers to rapes. “Though the hypocrites, prudes and zealots of the world would love you to believe that, it’s simply not true,” said Stormy, as reported by NPR. “This is like blaming young women who are sexual assault victims on the clothing that they wear.”

She went on to throw a timely dig at the Catholic church as well. “There is, however, lots of evidence linking clergy, especially the Catholic Church, to rape, so where’s their tax?”

Stormy’s booking with Deja Vu coincided with the release of her memoir, “Full Disclosure,” which was published in October 2018. This appearance in Chicago followed shortly after her debut as a stand-up comic of sorts on Wednesday, March 20th, at the Joke Joint Comedy Showcase in Houston.

The State Capitol protest refers to a 2012 law which requires Illinois strip clubs to charge an extra $3 for each guest or pay a flat tax. It’s meant to help fund rape crisis centers, which has been an area of serious concern for strip clubs in the state. Meaning, by taxing the clubs and giving that money to rape crisis centers, a correlation has been created which seems to link rape with dancers and clubs.

Vee Chitalu, a dancer at the Hustler Club in Washington Park, IL, told the Rockford Register that she doesn’t like the correlation of strip clubs with rape. “This job empowers us and gets us to where we can get on our own two feet and we don’t have to rely on somebody,” she said.

ID scanning solutions get a mobile upgrade with IDScan.net