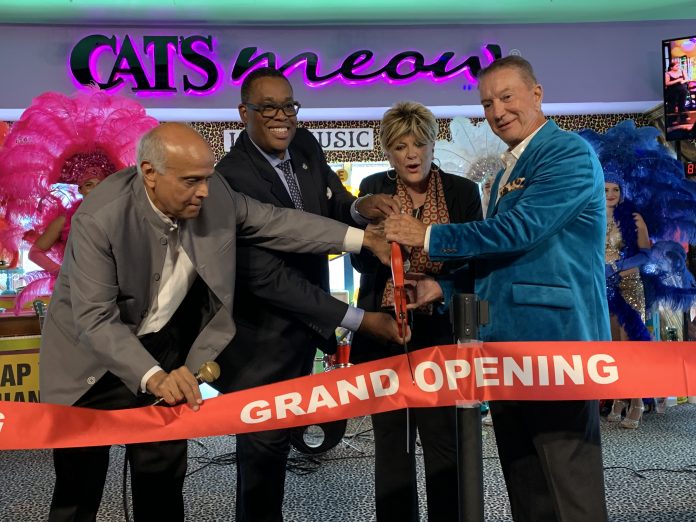 Déjà Vu, best known as an adult industry pioneer and the largest adult nightclub group on the planet with 100-plus adult nightclubs and more than half that many adult stores and theatres in 35 states and six countries, is branching out.

On July 18, Fremont Street in downtown Las Vegas hosted the grand opening of Cat’s Meow Las Vegas, the world’s largest karaoke bar. At 10,000 square feet and with a capacity of 800, Cat’s Meow is located right above the Heart Attack Grille, on the second floor of Fremont Street’s Neonopolis, downtown’s new 250,000-square-foot, $100-million shopping mall and entertainment complex. Downtown is the new, happening area in Las Vegas and Cat’s Meow is at the heart of downtown.

The original Cat’s Meow—also a Déjà Vu affiliated club—is in New Orleans’ French Quarter and has been a local landmark for 25 years, regularly drawing huge crowds. Fremont Street has a very similar vibe to the French Quarter, so Cat’s was a natural.

The methodology behind Cat’s no-dead-time on stage ensures making the mood is an always achievable goal. Between Cat’s professional emcees and the club’s patrons on stage with the emcees there to work the crowd and help them out, if need be, there is always nonstop entertainment and with the concert-hall sound system and lighting rigs to enhance the experience, you have to try really hard not to enjoy yourself. The karaoke on stage is live streamed, allowing you to share your experience with friends and family anywhere.

While adult nightclub operators are accustomed to being looked down on as social pariahs in most communities, Las Vegas is definitely not one of those communities. Déjà Vu has long operated businesses in Sin City and has a positive relationship with city officials.

The grand opening ribbon was cut and a mini-proclamation welcoming him to downtown Las Vegas was presented to Déjà Vu founder Harry Mohney by none other than Las Vegas Mayor Carolyn Goodman.

“Harry Mohney represents everything that means fun,” said Mayor Goodman. “Harry is so supportive of this whole community. He’s got great businesses, and great visions and we’re so proud that you have landed right here, in this facility, Neonopolis. Harry does everything with such energy. He brings everything to life and makes everything happen.”

Ryan Carlson, director of operations for Deja Vu services, revealed the Cat’s Meow brand is far from its ninth life with development plans for another five locations underway.

“It proves yet again that our group,” says Carlson, “the proud steward of over 40 well-known brands, is no one-trick pony.”

Larry Kaplan has for 19 years been the Legal Correspondent for ED Publications. Mr. Kaplan is a broker in the sale and purchase of adult nightclubs and adult stores and the Executive Director of the ACE of Michigan adult nightclub state trade association. Contact Larry Kaplan at 313-815-3311 or e-mail larry@kaplanclubsales.com.

Get to know DJ of the Year nominee, “Binger”!